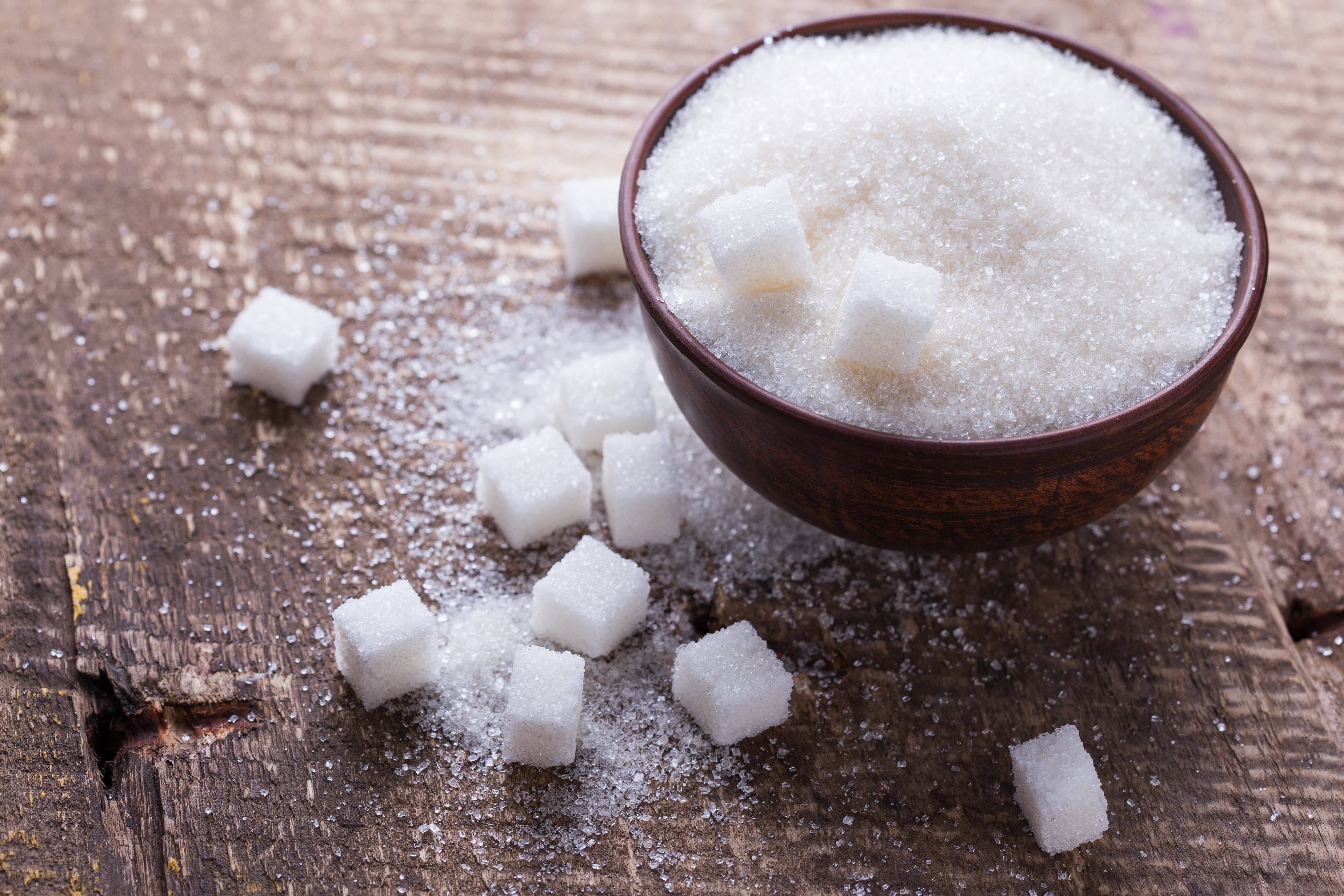 A common question I’ve been hearing during our 10 Pound Challenge is “how can I control my sweet tooth?” While it’s true that some people are less sensitive to sweet tastes than others (and hence require more sugar to achieve the same level of sweetness), the problem isn’t that you have a sweet tooth, it’s that sugar causes you to want more of it.

To your body, it’s all sugar

Whether you eat a potato, donut, piece of bread, noodles, or a scoop of rice, your body needs to break it down into the simple sugar glucose in order to shuttle it into your blood stream and ultimately to the cells that need it for fuel. The hormone responsible with escorting sugar to its final destination is insulin. Insulin also tells your body to store any fat you eat in your fat cells and to not release any stored fat until all the excess sugar is cleaned up.

Why is it necessary to put the breaks on fat metabolism when sugar is present?

1. Fat is much easier to store than sugar. The only way to store sugar is to convert it into glycogen and store it in the muscles and liver. The amount that can be stored varies greatly based on a person’s size and athletic conditioning, but the average person can only hold about 1 to 2 pounds of glycogen. As many have unfortunately found out, there is almost no limit to how much fat a person can hold on to.

2. Releasing stored fuel takes energy. Your body hates inefficiency, and using energy to release stored fat when a bunch of easily-utilized sugar is floating around is seen as wasteful. Your body will always prioritize sugar usage over fat, which means when you eat both, the fat will be quickly stored as long as there is sugar around.

3. Blood sugar is harmful. We’ve always been told that sugar is the body’s preferred source of fuel because, as I’ve mentioned above, it gets used first while consumed fat gets stored when both are present in the system. There is another thing that gets priority processing by our bodies; alcohol. It’s also hard for your body to store and provides a great deal of energy (7 calories per gram versus 4 calories per gram from carbohydrates), so that must mean that alcohol is your body’s preferred source of fuel, right? As we’re all aware, alcohol is actually poisonous to your tissues, and your body prioritizes it’s metabolism not because it’s so great, but because it’s so harmful. I always wonder why people haven’t made the same connection with sugar. Just like with alcohol, low levels have been shown to have beneficial effects, but too much leads to disease. More and more, we’re realizing sugar’s roll in obesity, but as I’ll go over later, there is more to worry about with sugar than your waistline. 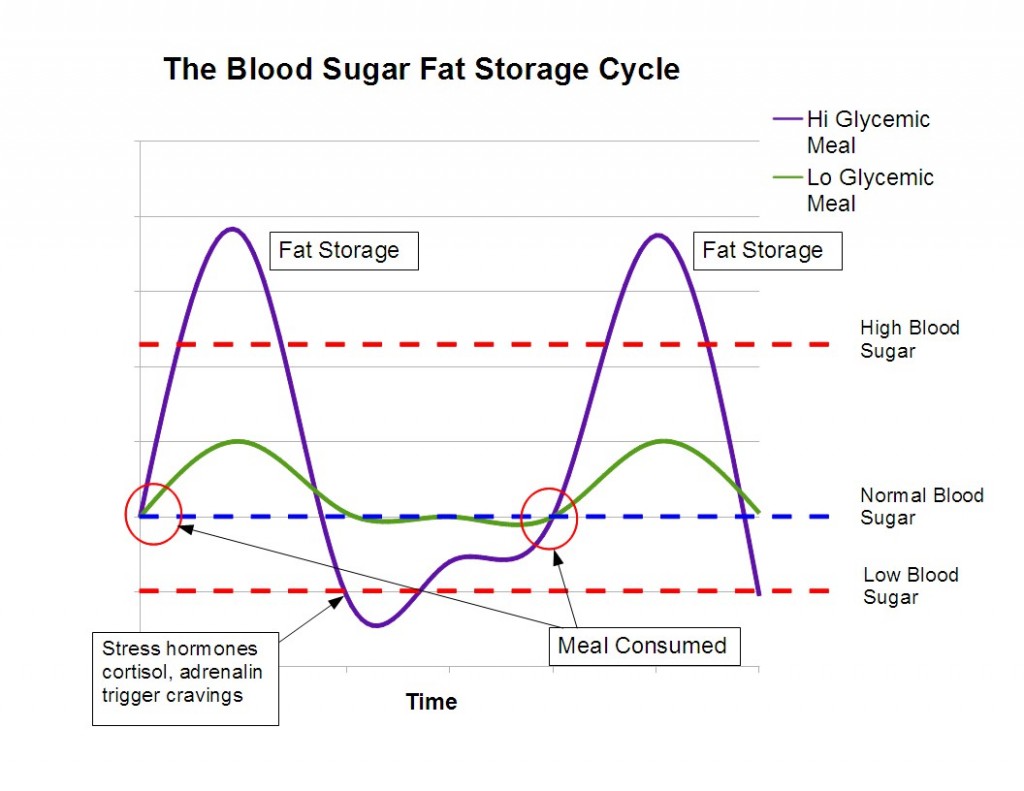 Back to the subject of a sweet tooth. Sugar cravings are typically a result of low blood sugar levels, and funny enough, one of the most common causes of low blood sugar is eating sugar. As I mentioned above, your body releases insulin to remove sugar from your bloodstream. Small levels of sugar are met with small doses of insulin, and the slightly elevated level of blood sugar is quickly returned to normal. That’s the ideal scenario and the one your body evolved to deal with. What your body isn’t designed to handle properly are all the carbohydrate-packed processed food concoctions that we came up with. They quickly release a ton of sugar into the blood stream causing your body to release an equivalent insulin response to get things back to normal. Unfortunately, those hormones don’t just evaporate after doing their job, so your body can’t get rid of the huge insulin levels fast enough. This causes your blood sugar levels to drop too low.

Too little blood sugar is a problem as well, so your body quickly triggers a series of responses (such as increased appetite, increased sugar cravings, and releasing the stress hormone cortisol) to get your levels back up. So now you’re hungry again, but your body is still in storage mode from the last deluge of insulin. The end result is that you will be more likely to store what you eat and you’ll be more likely to eat more sugar since that’s what your body is crying out for. With easy access to high-calorie food everywhere we go, people can ride this carb roller coaster all day long and consume a shocking amount of calories.

If you ever want to get an idea of just how much you’re able to eat while riding the carb roller coaster, take a picture of everything you eat one day, no matter how small and put all the pictures together at the end of the day (this was one of the Food Challenges during the 10 Pound Challenge). If you really want to make an impact, recreate all those pictures by piling the same items onto the table. Seeing it in pictures is one thing, but seeing it in person is usually quite shocking.

I mentioned above that your body releases the stress hormone cortisol in response to low blood sugar. Eating sugar causes those hormone levels to decrease which is why we consider sugar to be a comfort food. We release cortisol in response to all kinds of stressors, and sugar does reduce cortisol levels (and the accompanying unpleasant feelings) in those cases as well. It’s the other part of the sweet tooth I encourage people to explore. If you’re using sugar as a quick and easy stress reducer, I suggest upping your exercise levels instead. Exercise is a stressor that teaches your body to release less cortisol for other stressors. You’ll improve your health, reduce your sweet tooth, and decrease your stress response to all of life’s little stressors. 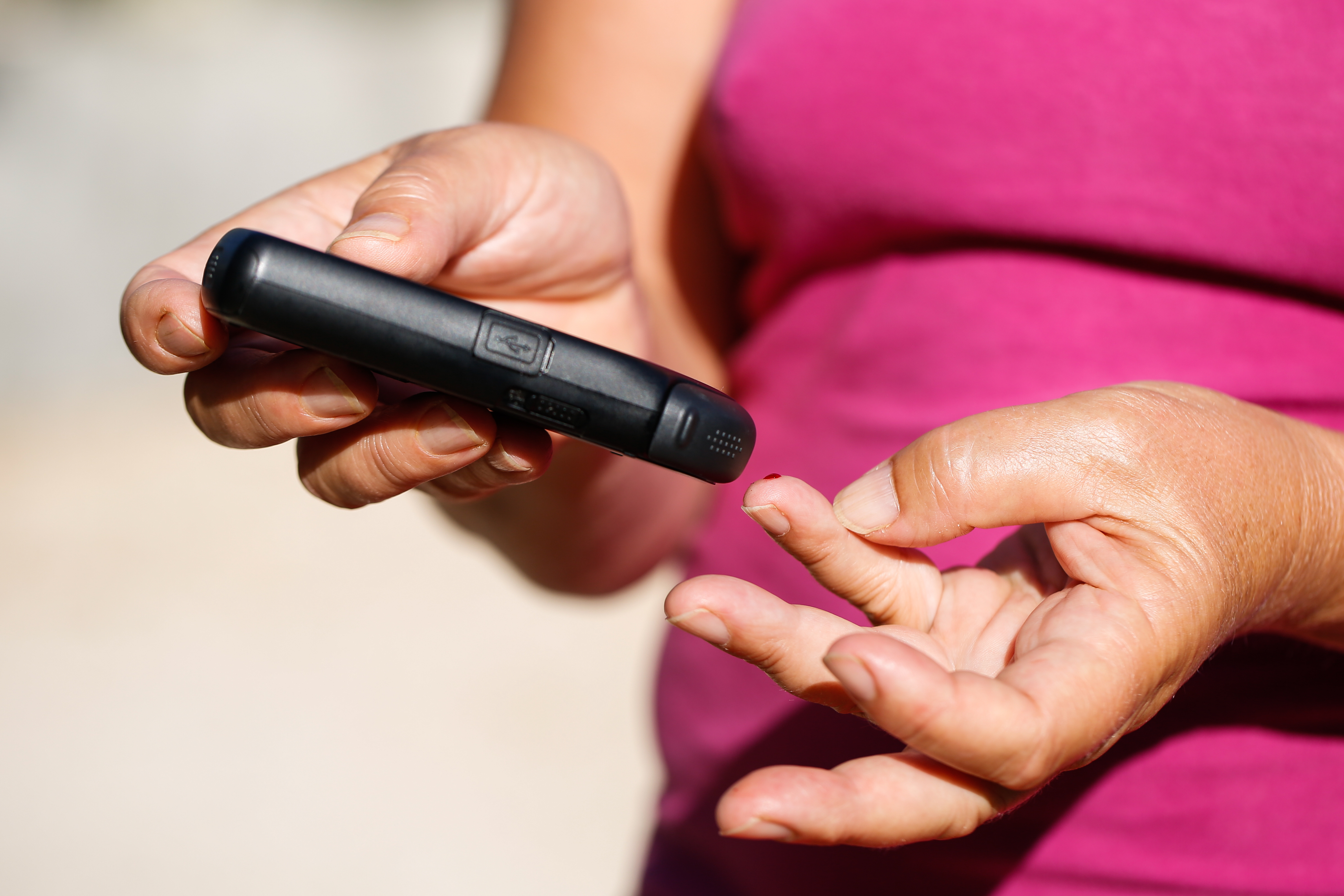 Aside from encouraging fat storage and spiking your appetite, high levels of blood sugar is harmful. Whenever sugar enters your bloodstream, a percentage gets stuck to your blood cells and stays there until those cells die and are replaced 3 months later. Low levels of sugar don’t leave much behind, but consistently high levels leave a thick, sandpaper-like coating that shreds your blood vessels as these course cells travel throughout your body. Tiny capillaries like those in the eyes, fingers, and toes go first, but every vessel gets constantly abused which causes cardiovascular disease and damages every organ in your body. This is what is known as prediabetes, and you don’t have to be overweight to be afflicted with it. Aside from a blood test, there aren’t any symptoms, so it’s difficult to detect until you inevitably make the slide from prediabetic to full-on type 2 diabetic. This is when the damage gets so severe that you start experiencing disfunction and worse yet, it means it’s been going on so long that it’s difficult to reverse.

Aside from the blood vessel damage, high levels of blood sugar also exhaust your pancreas, the source of your insulin. I think people understand that as we age, we produce less and less hormones. What they don’t seem to get is that it’s because the glands and organs that produce them basically wear out with use, and they wear out really fast with overuse. A ton of sugar requires a ton of insulin to deal with it. Unfortunately, as I mentioned above, your muscles and liver can only store so much, so all those signals from insulin start to get ignored by your other cells. This is what they mean by insulin resistance. Insulin becomes less and less effective as you body runs out of room for all the sugar. This causes the sugar to linger in your blood longer and longer, causing greater harm as more of it adheres to blood cells. In response, your pancreas releases even more insulin. Not only does this flood of insulin make your body quick to store any fat you eat and resistant to release any body fat, but it pushes the pancreas to its limits. Eventually, it will stop being able to produce insulin and that’s when diabetes becomes irreversible.

So, was my strategy above to basically scare your sweet tooth away? Maybe a little. I want people to understand what’s really at stake when it comes to diet. People get so focused on losing body fat, they miss the bigger picture. The added sugars in processed foods is doing you harm - right now, as you sit and read this.

I think we do a terrible job of educating people on the real harms of sugar. I’ve been explaining how too much sugar takes people down the prediabetes to diabetes path for a decade now, and I’ve yet to come across someone that already knew how it worked (other than doctors and people that have already been diagnosed with something). Even people that I’m trying to convince to reduce their sugar just think I’m doing so because sugar is quickly converted into fat. Honestly, it’s the fat you eat with the sugar that gets stored, but I still recommend eating healthy fats with carbs because it slows the release of sugar into your bloodstream. There is still a place for carbs in your life, but it needs to be a much smaller place and it needs to be balanced with other nutrients to prevent the flood of sugar into your system and all the harm it causes.

If you haven’t read it yet, I highly suggest you check out the article on how to structure your diet so that you can learn how to slow the release of sugar into your system (and eliminate all the problems it causes) with a diet that you’ll enjoy. It’s not about losing weight (although that will happen) and it’s not about giving up carbohydrates. It’s about learning to add them into the mix so that you can prevent the carb rollercoaster effect and get your body back to functioning properly. We were meant to eat carbohydrates which is why we find them delicious. I’ve always said that food is a joy and you can continue to enjoy carbohydrates, but like most Americans (and increasingly like most people around the world), you need to greatly reduce the proportion of simple carbs that you put on your plate each day. Your sweet tooth will quickly go away once you hop off the carb roller coaster and a lot of the damage that you didn’t even know you had will start to reverse itself just as quickly.

This is amazing! The way you put it, it’s actually easy to understand. I am eager to share this with my daughter, who has been diagnosed with prediabetes.

Thank you for that. I think it’s an important fact to get across and I’ve seen it help a lot of people when they finally understand how it works. Like I said in the article, we don’t do a very good job educating people on this important topic.