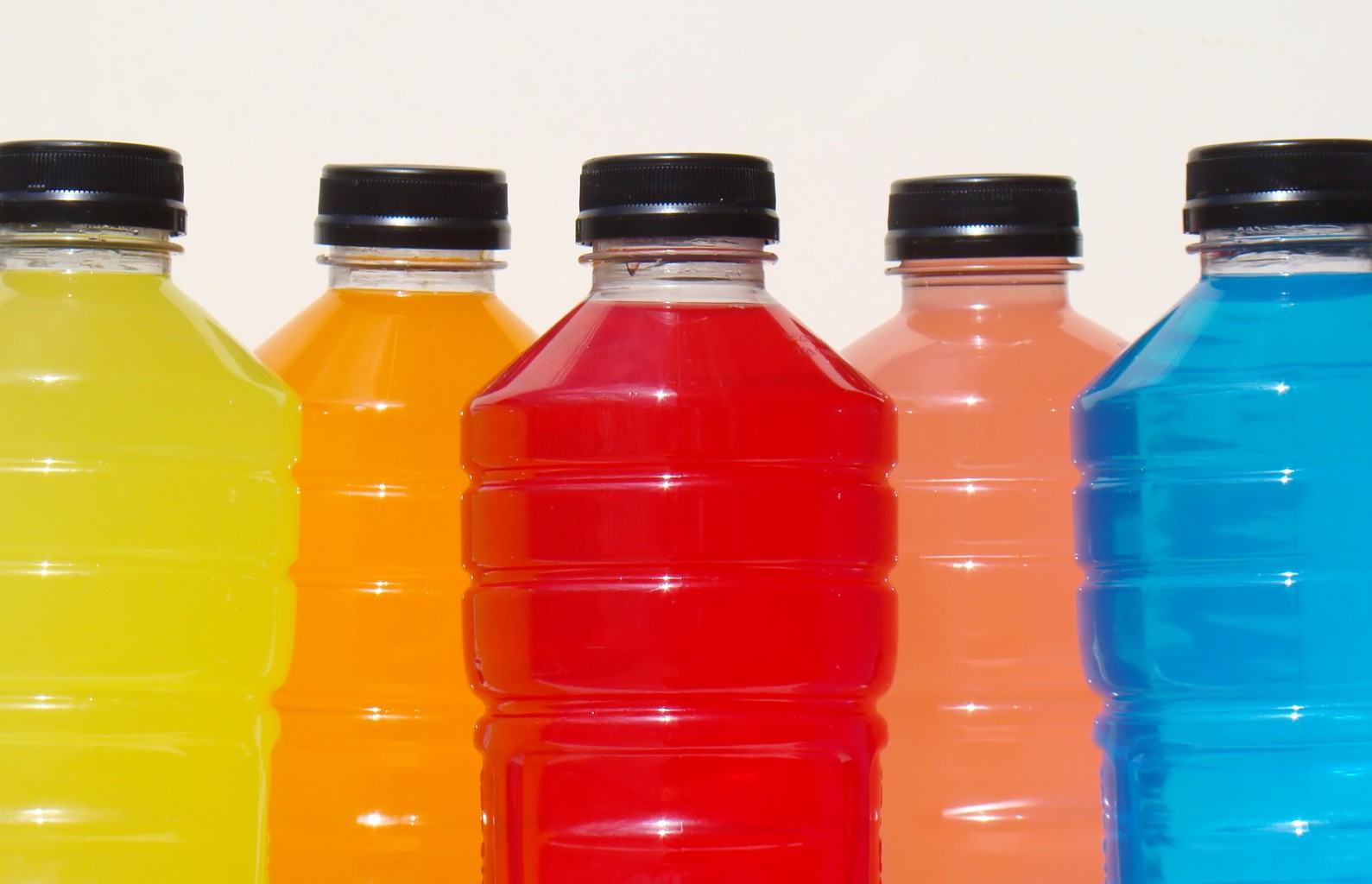 “Everyone should drink eight 8 oz glasses of water a day for optimal health.”

“You can’t trust thirst. By the time you feel thirsty, it’s already too late.”

We’ve all grown up hearing these bits of hydration wisdom, but where did they come from? And are they even true?

While a misunderstood portion of the “8 by 8” recommendation did come from a U.S. government-sponsored health board (more on that later), a lot of our hydration knowledge comes from sources like the Gatorade Sports Science Institute (sponsored by Gatorade’s parent company PepsiCo), the Lucozade Sports Science Academy (sponsored by GlaxoSmithKline, the makers of Lucozade), and Coca-Cola (the makers of Powerade). If that instantly feels like a massive conflict of interest, then you now see the problem. The BMJ had a great article exposing all these conflicts of interest and the rise of our new focus on “forced hydration” for better performance.

A great deal of our “science” concerning dehydration and optimal hydration come from flawed studies of elite level athletes. Even if the studies weren’t filled with low-quality evidence, the conclusions based on athletes training at high-intensity for prolonged periods of time does not cross over to the average person consuming sports drinks (the people these companies are targeting).

I recommend giving The BMJ article a read. It’s a fascinating look at a common problem plaguing our modern nutrition guidelines - dietary advice being formed by the very companies hoping to sell as much of their products as possible.

This article is going to quickly focus on some of the hydration myths that have been successfully marketed to us by beverage companies. Dehydration can cause problems (as can over-hydration), but our bodies are not as fragile or as flawed as we’ve been led to believe. We continually adapt to our environment and our kidneys do a great job of adjusting water output to maintain a proper fluid balance. If you drink more, you will pee more. That’s pretty much the extent of what you will accomplish by forcing fluids. That said, I have found that some people do confuse thirst for hunger, and a glass of water is a good, no-calorie way to keep your appetite under control.

Let’s take a quick look at some of the biggest hydration myths out there:

I figured I’d start with the biggest one since it’s also one of the oldest myths. Any type of dietary advice that gives out exact portion sizes yet doesn’t take a person’s size, age, activity level, or gender into account should immediately give you pause.

This myth originally came from a U.S. government-sponsored Food and Nutrition Board in 1945. The board didn’t specifically state people should consume a specific amount of water, they just said this seems to be a suitable daily allowance of water:

“A suitable allowance of water for adults is 2.5 liters daily in most instances. An ordinary standard for diverse persons is 1 milliliter for each calorie of food. Most of this quantity is contained in prepared foods.”

No one is sure how 85 ounces became 64 ounces, but thankfully it did or this recommendation would be even harder to meet. Perhaps they changed it once they decided to gloss over the part where you can also get water from the food you eat. While I still recommend water to people as a no-calorie way to rehydrate, water is not magical and any liquid (even those found in foods) will restore lost fluids. People believe that caffeinated beverages like coffee cause a net fluid loss because they make you pee more, but this isn’t true either. 250 to 300 mg of caffeine will increase urine output, but it still won’t cause a net loss and exercise actually negates this increased output. 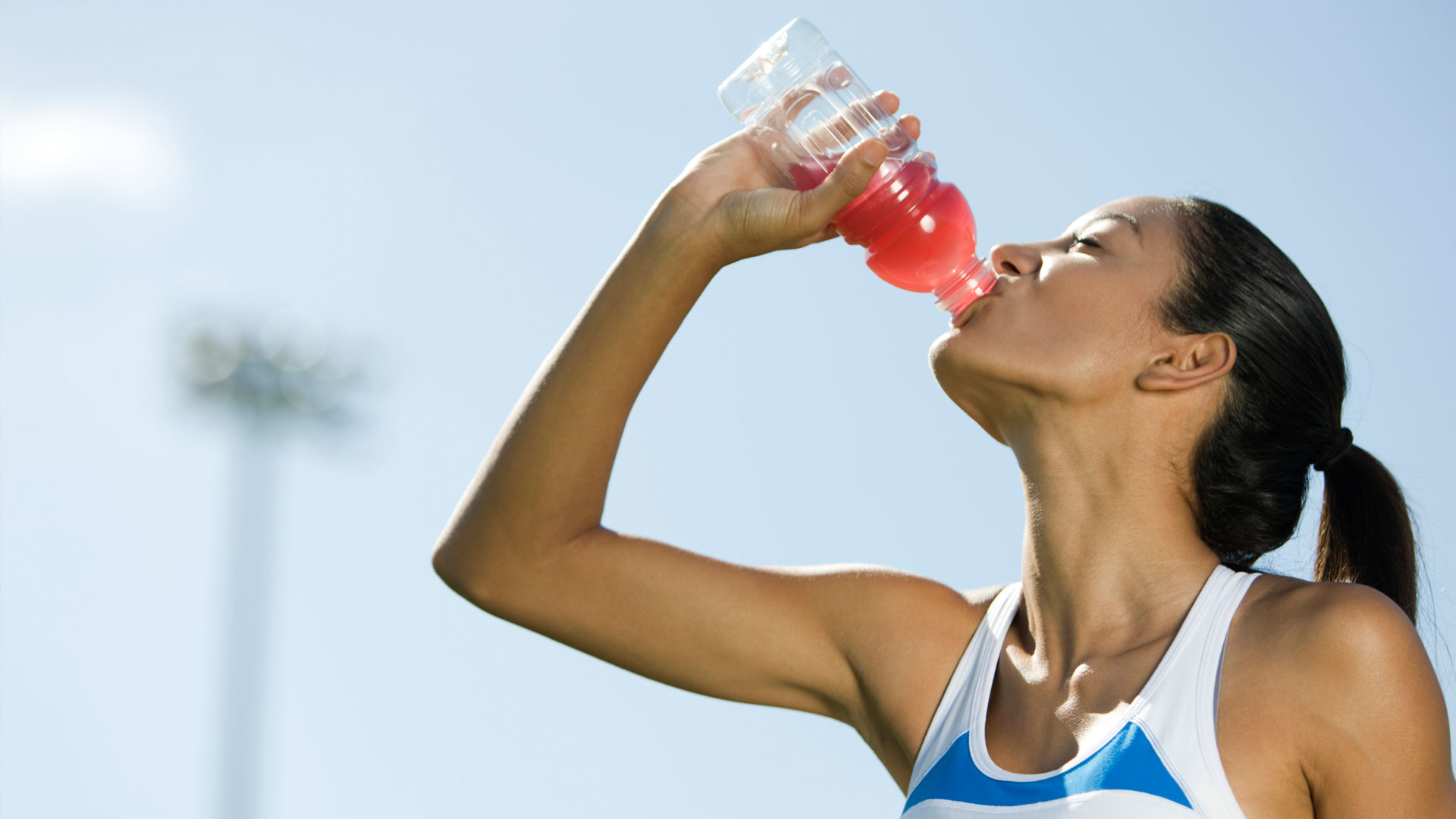 This is probably the biggest myth perpetuated by beverage companies and one that I feel has done far more harm than good. Any research done outside of a beverage company has shown that thirst is actually a pretty good indicator of fluid needs. Trying to “stay ahead of thirst” has led to two significant issues:

1. Obesity: The average exerciser does not need a sports drink to rehydrate. If you remember from the Truth About Diets series parts 1 and 2, when your body has carbohydrates available in the bloodstream, it will preferentially burn these up instead of mobilizing stored body fat for fuel. Since most exercisers aren’t elite athletes in need of energy after 3 grueling hours of training, that sugary sports drink is actually sabotaging all their efforts. Worse yet, most sports drinks are consumed at people’s desks or other sedentary times because people assume if these are designed for athletes then they must be healthier. Sugary sports drinks aren’t that different than sodas and both can lead to metabolic syndrome, obesity, and a host of health problems if consumed excessively.

2. Hyponatraemia: People don’t understand that drinking too much water can actually be fatal. In fact, more people have died during and after marathons from hyponatraemia (brought about by drinking too much water) than from dehydration. Your body constantly needs to move water in and out of cells to maintain proper cell pressure. Your cells don’t have little water pumps to manage fluid levels, so instead they move sodium in or out of the cell and then water naturally flows from areas with high concentrations of solutes (molecules dissolved in a liquid) to areas with low amounts of solutes. Hyponatraemia occurs when you add so much water to the mix that your cells can’t pump out enough sodium to even out the osmotic pressure on both sides of the cell membrane. The end result is too much water flows into your cells causing them to swell to dangerous levels. Extreme cases of hyponatraemia cause the brain to swell which eventually results in death. While it is rare to experience severe hyponatraemia just sitting around (you would need to continue forcing liquids well past the point of feeling like you were going to vomit), the stresses caused from extreme endurance events like marathons cause you to already retain water. Adding too much water while in this state is where things can become dangerous.

So if forcing liquids down our throats for maximum performance can harm us by causing dangerously low levels of electrolytes, then sports drinks should be able to counter the risk right? Unfortunately no. Studies that have looked at whether sports drinks or water cause less risk have concluded that it is water retention that leads to hyponatraemia, not sodium loss. In response to the muscle damage caused by extreme endurance events like a marathon, your body releases a stress hormone that tells your kidneys to stop excreting water. This is why hyponatraemia is a risk to endurance athletes and not people just sitting around at their desks. Your kidneys will keep your water balance correct (unless you really push it), but once the muscle damage starts piling up and your kidneys get the signal to hold on to any water, drinking too much during and after your race can lead to serious problems. 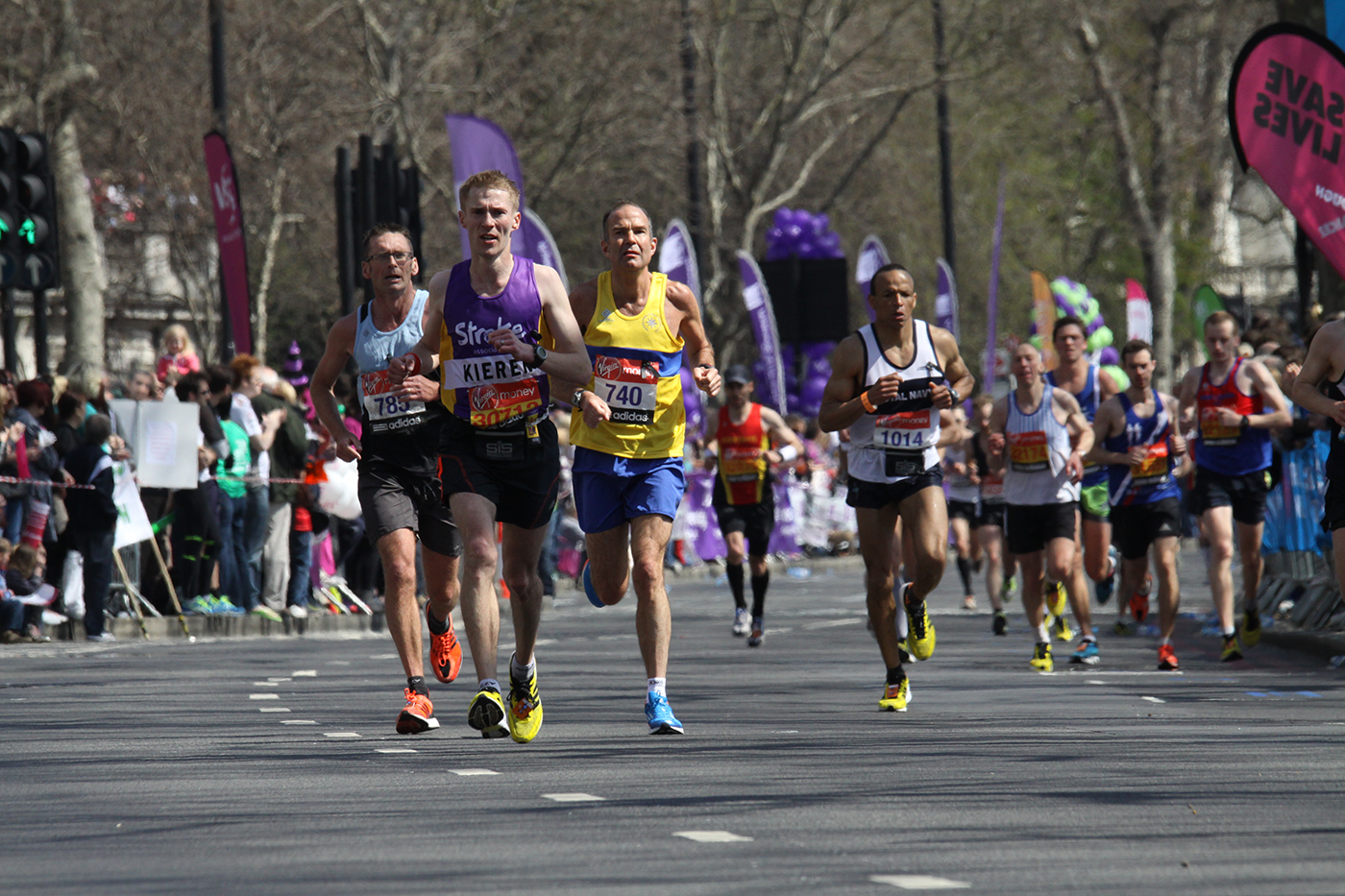 Advice for our event runners: I know this all sounds scary but you should really have your water needs figured out long before your event. The biggest advice is don’t try to do something different than you did in training. I found an excellent article on how to adjust your water intake during your training plan to protect yourself from hyponatraemia. Train smart and use the same plan during your event. People go astray when they try to do something new during the event for an extra boost. Don’t experiment on race day, stick with what got you this far and you’ll be fine.

This was probably the myth that put Gatorade on the map in the first place. They taught the general public that their specially formulated electrolyte beverages prevented muscle cramps during exercise. It turns out that dehydration has nothing to do with muscle cramps. This makes sense if you think about it. If dehydration caused muscle cramps, then every muscle in your body would be susceptible to cramps during exercise. The muscles in your face should be cramping just as much as your leg muscles after a lot of running, but of course, only the exhausted muscles are the ones cramping. Your muscles have two protective mechanisms to prevent injuries. The muscle spindle contracts to prevent over-stretching, and the Golgi Tendon organ prevents muscle contractions to stop over-contracting, both of which could lead to muscle tears. As your muscles get tired, the muscle spindle goes into overdrive to prevent too much stretch while the the Golgi Tendon organ takes a nap. The end result is an uncontrolled contraction known as a muscle cramp. The failure of your protective systems to protect your muscles seems to be caused more by fatigue and heat than dehydration. Hydration plays a role in keeping you cool, but it can’t do as much as we would like I’m afraid. Once you start overheating, dumping that cold drink over your head can actually help more than drinking it. If you start cramping up, rest and stretch the area and really assess yourself before you consider going back to your activity. 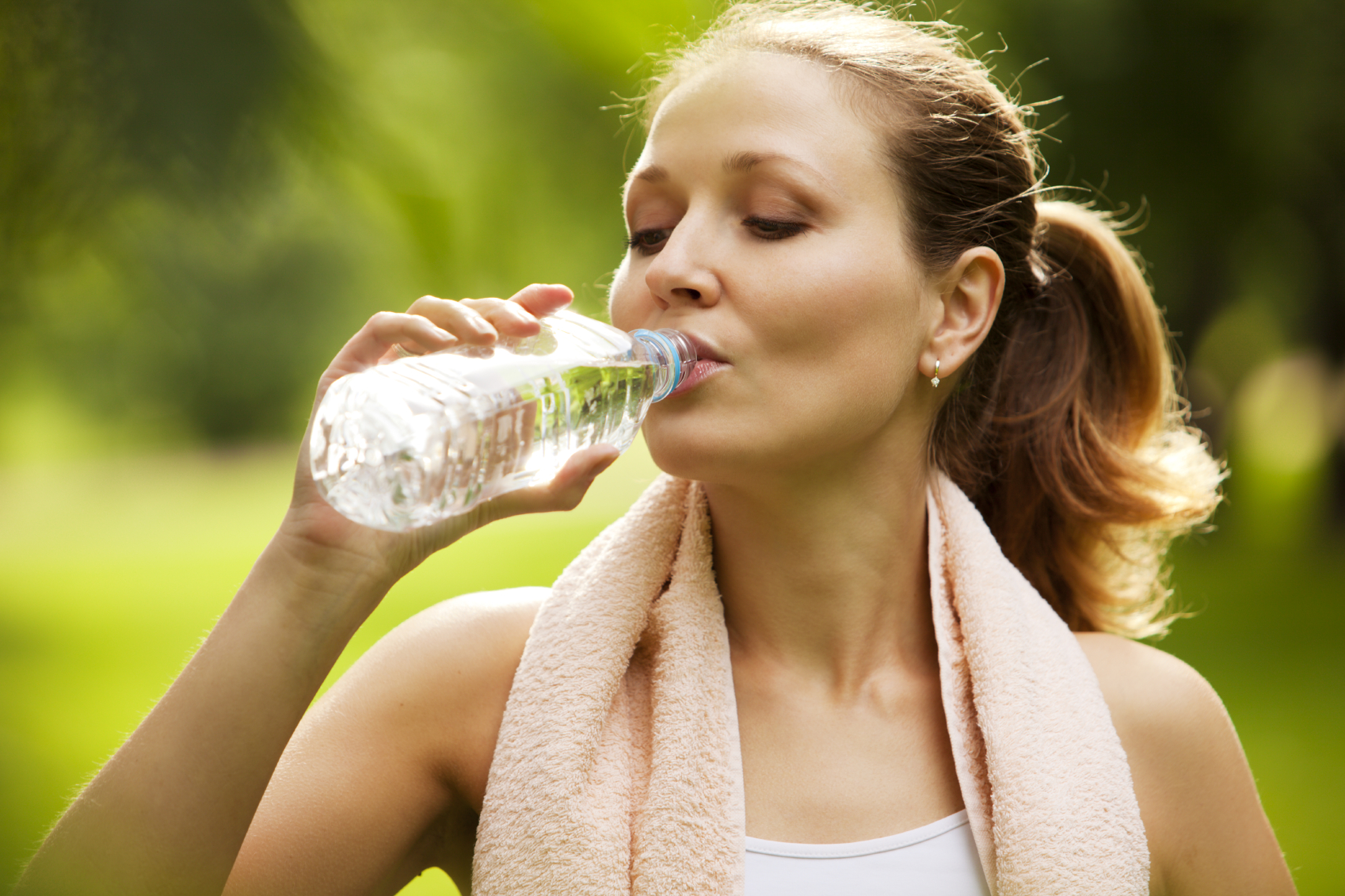 Hydration is important, not magical

The human body is happiest when it achieves a state of homeostasis (a stable equilibrium point). In the case of hydration, this occurs when your body has a perfect balance of fluids going out with fluids being consumed. Our focus on forced hydration has simply trained our kidneys to increase the amount of urine being excreted on a daily basis in order to maintain proper homeostasis. It also trains us to get thirsty more frequently to once again balance out the consumption side.

If we only drank water, this wouldn’t be much of an issue, but training ourselves to need larger sugary drinks on a more frequent basis has significantly expanded our waistlines. Cutting out liquid calories is one of the easiest ways to positively impact your weight and your health. Switch to water for a healthier choice, but don’t force it down your throat. I frequently hear from people they don’t like the taste of water, but they’re going to like it much less if they aren’t even thirsty when they drink it. Any food is delicious when you’re starving and any liquid is amazing when you’re dying of thirst. These are extreme examples of course, but forced hydration is easier with sweet tasting drinks than with water. Listen to your thirst and give it water when it needs it, and you’ll find yourself feeling better because you won’t be damaging yourself with sugary drinks anymore. While I don’t recommend forced hydration, I still recommend drinking water to replace reduced food volume. If you’re dieting and hungry, it’s a good trick to keep your appetite under control. Add extra water to your meals and grab a drink when you have an urge to snack. Just realize the magic isn’t in the water you add, it’s in the sugar you remove from your diet.

So this begs the question: What IS Gatorade good for? I don’t drink it, but this is a very interesting article.

If you are working out for 3+ hours (like event training) then the big dose of sugar does help fuel your workout and restore your glycogen afterwards. I just want people to understand that it isn’t a healthy alternative when you’re sitting around.